Directors Brooke Perez and Linda Jones banned together to put on this year’s musical with the help of Carson Decker and Dustin Morningstar. 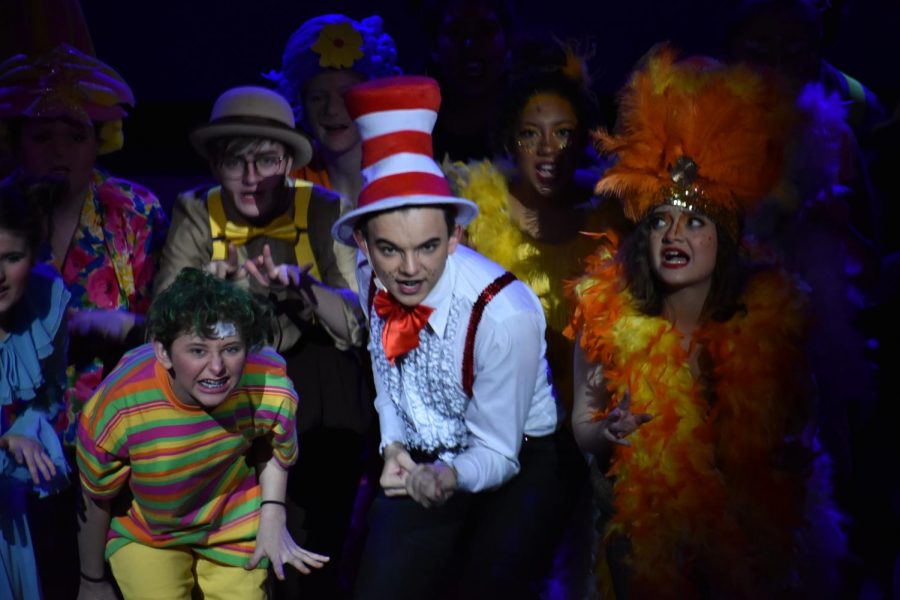 The opening number shows all cast members and explains the basis of the wonderful show.

Since this is such an iconic musical, many looked to other performers when preparing for roles.

“To get inspiration for my own take on my character, Gertrude, I looked to other schools,” said Addison Bassemier (10). “Mad hatter meets Corny Collins meets Cher is how I based the Cat on.” Joel Stephens (12) chuckled. “Being a curious child myself, I channeled into that.” Augustus Jones (9) smiled.

Much work goes into a single scene, dance, and song. Sometimes it can even be two hours saying the same line over and over again.

“My favorite part in the show is when Gertrude shows Horton her new fabulous tail. It’s so unexpected from her being a shy and timid character!” Exclaimed Bassemier. “When Horton sees Mayzie on an egg, on a nest, in a tree. I get to say my favorite line.” Laughed Quaide Parker (10) “In the reenactment, I get to go full chaotic.” Stephens said.

Bumps in the road are always going to happen, when is the question.

“Before the first rehearsal, I broke my ankle and my dress tore a lot. It was hard and made it difficult, but it just made the success of the show date so much better.” Bassemier said with a smile. “The tree. Every time I would sit in it, I thought I was going to fall out.” Confessed Parker. “I’m clumsy,” Jones admitted, “I fell a lot and was constantly hitting my head.”

Once you play a character, you sometimes see yourself in them.

“Me and Gertrude are both shy, but show our true selves and give our whole hearts to the people we trust,” Bassemier said. “Horton is just kinda like a middle-aged dad and I feel like an old soul sometimes,” Parker said bashfully. “Jojo is just unapologetic and because of this, he is seen as an outcast, I can relate to that,” Jones said.

Even though it is a completely different person, many actors are similar to the characters they play on stage.

“Joel Stephens chaotic energy is what makes him the best Cat in the Hat!” Giggled Bassemier. Parker believes that he is most like his character and Jones couldn’t agree more. “His connection with Horton is remarkable.”

Sometimes you fall in love with other characters along with your own.

“If I could be any other character, I would be Mayzie LaBird! She’s a bird that knows what she wants and how to get it.” Bassemier laughed enthusiastically.“I would want to be the Cat in the Hat, he is just a fun guy!” said Parker. “I want to be the Sour Kangaroo. She says ‘Humpf’ and just is sassy.” Kid Stephens.

Right before the curtain comes up, actors, musicians, and everyone else takes their last few seconds to prepare.

“I drink a ton of water and just talk with my cast members, it really helps me clear my mind,” Bassemier said. “We have a whole thirty-second dance break before the show starts. One of the best parts of the night.”Stephens said.

The last show can be really emotional for the seniors. For some, they might not ever step foot on a stage again.

“It’s crazy actually. My very first show ever was with Mrs. Perez and we did Seussical Jr. so it’s like it’s coming full circle.” Parker admitted. “I’m just sad. I’ve met all of these amazing people and I don’t know what the future holds.” Stephens choked up.